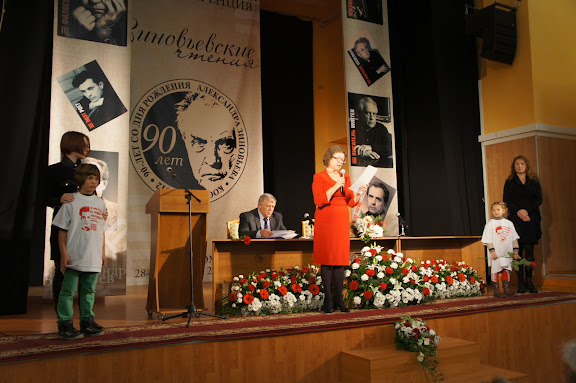 The New Utopia – The Ideology of the Future

I would like to forward Alexander Zinoviev’s message to the man of the future. In his last years Zinoviev, one of the greatest Russian ideologists of the XX-XXI century, was elaborating an ideology for the party of the future. His message can be comprehended only if one assimilates the intellectual and artistic legacy offered to us by this very special man who once lived upon Earth:

“We need a dream, a hope, a utopia. Utopia is a great revelation. If people do not succeed in inventing a new, at first sight maybe even useless utopia, they won’t survive as human beings. We need a fairytale, for it is of great importance for people, which chimera to believe in and which fairytale to trust”.

Today we – humanity – require a new utopia. For more than 20 years we have inhabited a world of anti-utopia, of nightmares becoming reality, in crooked mirrors, in a world shrinking before our eyes. That is why we need a new utopia.

Living symbols are better than dead ones. An ideology that is alive imports more than stiff theories. A vital society is happier than a degrading social organism.

It was some months before our return from exile when one morning back in 1999, Alexander Zinoviev, with a shining face, spoke to me about a stunning dream that he just had awakened from. This dream was of such an immense positiveness and both speech and story were so unusual for Zinoviev, that one might have thought it was someone else who was speaking.

He had found himself in the world of the future at the beginning of the XXII century. It was an unfamiliar, densely populated world, wealthy, rich and prosperous, inhabited by merry people. He got the impression that permanent, ubiquitous happiness and enthusiasm were dominating smiles and moods. In his dream, Alexander learnt about the reason of this joyfulness: everybody without exception could breathe and drink water for free, walk freely upon the earth, think and to speak freely. All this was a result of the New Social contract, proposed by one man, the romantic idealist Svetly Bright.

It turned out that the world had undergone a thermonuclear war. Life could be sustained only upon the largest continent that thus had become one country. This most devastating war in the history of mankind served as a dramatic and logical end to the era of carnivorous capitalism in its final state of absolute evil. It had turned into a sterile, dissimulated corporative Fascism with everything monetized, what one could possibly turn into money: every social action had a price, all natural resources were accessible only by payment, every material and cultural wealth, every information or knowledge had to be paid for. Water, air and land did not belong to people any more.

The end of the XXI century was a time without any hope and charm, without illusion and enlightenment, without love and seduction, without happiness and joy… It was a time, when one Truth existed, but nobody believed in it, because whoever enunciated truth didn’t possess any authority. Truth had suffered a shattering blow with its authoritative source being annihilated. Notions as Justice, Pride and Creativity had sunk into oblivion.

Svetly Bright, this romantic idealist, was born at a time when humanity was already entirely enslaved by innovative technologies and sophisticated inventions. The latter left no chance for reason… and reason was yet the principle outcome of human history and evolution! Svetly Bright was born at the same time as the question: Had nature really wasted millions of years on creating such a useless creature as man?!

Svetly Bright’s life changed fundamentally during the thermonuclear war. Being oncologist, he was day and night restlessly rescuing hundreds and thousands of irradiated and injured people. He invented a unique method of massive curing and brought even hopeless patients back to life.

He realized that not only the life of concrete people relied on him, but the survival of the whole planet. Hence he proposed a New Social contract, and people believed in him, and they accepted the new conditions of survival. The romantic idealist Svetly Bright thus became the embodiment of the ideal New Man.

Now everyone who attained the age of majority joined in the New Social Contract and swore the Citizen’s vow thus promising to make the world better.

Today is a special day, so I decided to make this story public. Like my Teacher Alexander Zinoviev, I have a dream and I wish Russia to keep its place in history and my Russian people not to vanish into thin air. We are living in an epoch, when the sum of our nation’s contributions to world history and to human civilization is being measured.

Today I would like to give Alexander Zinoviev’s legacy a start by laying the foundations of a New Utopia, the ideology of the world of the future. A country, a world that is deprived of ideology is doomed to perdition, but we want to sustain humanity in humans. I say “yes” to the New Utopia and the New Ideology. Let this New Utopia become the foundation of renaissance of man and civilization, let it be the base of a new social ideal and of the struggle for an alternative history.

The ideology of the future is neither capitalism nor communism nor a deceitful liberalism — it is a new ideology of human coexistence, based on communal understanding and protection of such basic and principle terms like Human, Life, Love, Joy, Freedom, Truth, Equality, Justice, Pride, Morality, Labor, Creativity, Nature, Water, Air, Earth.

Long live the new pilgrims of the XXI century!

I greet you, even if you are yet to be born!

widow and keeper of the intellectual legacy of Alexander Zinoviev

ENGLISH: Olga Zinoviev: The New Utopia – The Ideology of the Future