Zinoviev Club, 17.03.16
by Olga Zinoviev
Report by Co-Chairperson of Rossiya Segodnya’s Zinoviev Club Olga Zinovieva came as an alternative to a typical Western outlook on values, and was described as the main event of the first day of a UNESCO conference in Sofia. 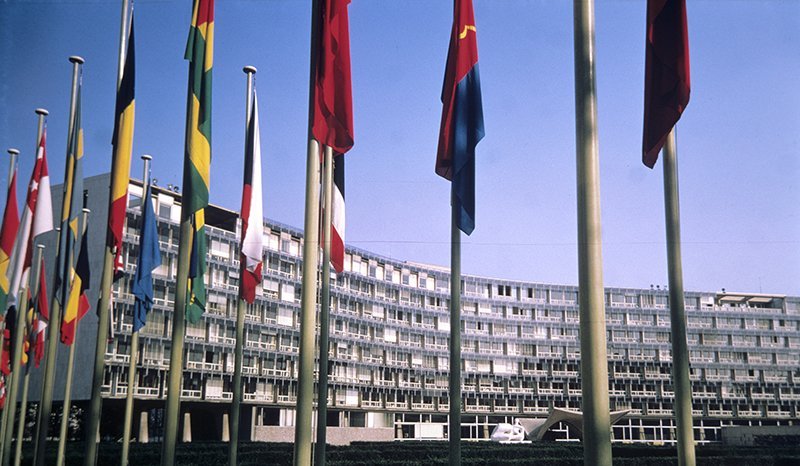 A UNESCO-sponsored international conference, Which Values Unite Us Today, was held in Sofia, Bulgaria, from March 10 to 12.

Everyone agreed that the report presented by Olga Zinovieva came as an alternative to typical Western outlook on values, and was described as the main event of the first day of the conference. We present it to our readers.

The values that we are losing

The incredible speed of the devaluation of the fundamental tenets and creativity developed by humankind over centuries as the inner depths of its conscious and subconscious mind were awakening, from the early days all the way to the Age of Man, now seems forgotten. I hope it’s not forgotten forever, though.

It goes without saying that historically Russia and Western Europe are two parts of a single geographical Europe and a single Christian world.

After Christianity split, Eastern and Western Europe proceeded to develop in parallel, rather than take different courses. In any case, de-Christianization and de-traditionalization were equally typical in Russia and Europe.

Fortunately, in the second half of the 20th century, following their victory over fascism, Western and Eastern Europe again grew closer in terms of culture and values.. However, by the 21st century, forces emerged in Europe that sought to impose their own perspective on a new Russia rather than attempting to establish a dialogue with it. Most importantly, the American consumer culture came to dominate Europe, and has become an instrument in a hybrid war against other authentic cultures.

The values opening up to a person born and growing up in this world come from his mother’s milk and are part and parcel of his culture. We understand this world and believe that it is supposed to be the way it is. However, there’s also a long list of conquests, losses, grief and joy that are inseparable from all the wonders of the world. Just think of the price that was paid for the Egyptian pyramids, Taj Mahal, the cathedrals of Florence, Palmyra, the Church of the Intercession on the Nerl, the Élysée Palace and the Winter Palace. The list goes on and on. It recreates a grand picture of material and spiritual values, which were created by the hard work, sweat and blood of the people who once lived on our planet.

As soon as the hard times were over, soldiers, refugees and prisoners of war returned home to their hearths. They started families driven by the all-too-familiar sense of love and human warmth. They were normal families with a protecting father and a homemaking mother who took care of their children. Parents were referred to as mother and father, not some faceless new names, such as Parent 1 and Parent 2.

Amid frenzied modernization and globalization, including in the sphere of human relationships, we are losing a very fundamental structure — the family. Families across countries and continents pass down basic values from one generation to another, such as morals, culture, customs and family traditions that extend to nations, countries and the entire world.

Those are universal apex values, such as creativity, people, God, truth, power, law, as well as the things, phenomena and ideas that are important to both culture and the spiritual life of the people, society and the individual, as part of one’s inner moral realm.

This spiritual capital of humankind, which has accumulated over thousands of years, expands rather than devalues. Axiology — the value theory, which establishes links between values and the reality of a human life — is known to explore the nature of spiritual values. The issue is primarily about moral and aesthetic values, which are rightfully considered to be higher values, because in many respects they determine human behavior in other value systems.

Moral values focus on the relationship between good and evil, the nature of happiness and justice, love and hatred, and the meaning of life.

These values express the ultimate foundations of the human existence with which humans can relate to the outside world. These principles, ideals and basic life benchmarks are specific to each person and to each historical type of culture.

Key philosophical concepts — life and death — are embodied in a face-off between war and peace, heaven and hell.

Worldview values also help humans to relate to the cosmos and nature in general, with space and time as dimensions of existence. This group of values forms culture-specific views of the world picture, including the idea of the cosmos, Earth, space, time and motion.

Worldview values determined the attitude toward humans and the idea of their place in the world. This set of values includes humanism and individuality, creativity and freedom. They border on moral values.

I am not going to analyze these processes in detail. What I want to say is that today traditional European culture and Russian culture are faced with two planetary threats that put their very existence in jeopardy.

On the one hand, we see the dominance of mass consumer culture that seeks profit rather than spiritual evolution of the people. Comic books are peddled instead of great literature, pop music instead of classical music and TV shows have replaced theater performances.

On the other hand, we are all aware of the terrorist threat in the Middle East, where terrorists destroy Christian monuments and the people of Christian faith. There’s a saying in Russia, “all brawn and no brains.” As is well known, the process of creation requires enormous effort and willpower from individuals, nations and the ages. Destruction follows an inclined plane and does not require much effort. Breaking is not the same as making.

Good and evil are basic moral categories. One’s concept of good and evil determines his interpretation of moral values such as humanity, compassion, justice and dignity.

It’s a kind of global morality level where a person feels like being part of the humanity. The “golden rule of morality” can be worded in many ways, but it can be reduced to the categorical imperative, the immutable moral law articulated by Immanuel Kant, ” do unto others as you would have them do unto you.”

Moreover, morality governs relations between groups and communities of people. Here, the issue is about such moral values as loyalty, honor, responsibility, duty, patriotism, collectivism, hard work and integrity. We are talking about the ability to reconcile common interests and personal needs.

In addition to the above, there are also aesthetic values. These are spiritual values associated with identifying, creating and experiencing harmony. As is known, harmony was understood by the ancient Greeks as the basic quality of the cosmos, as a unity of diversity, cohesion, harmony and integrity. Harmonized relations between a human, the outside world and other humans create psychological comfort, enjoyment and pleasure. Harmony is experienced with awe and inspiration and creates beauty. Aesthetic values are closely related to the emotional culture of human beings, and their ability to experience strong feelings, to perceive a multitude of various emotions and feelings. An aesthetic need is the need to identify, acquire and preserve harmony. It’s the need for universal harmonization of human relations with the outside world and with themselves. The aesthetic focus on bringing real life into harmony and conformity with the ideas of perfection is very valuable.

There are two more noteworthy types of spiritual values. They actually synthesize ideological, moral and aesthetic values. Primarily, those are religious and artistic values. Unfortunately, it is already known that Islamic radicals destroy not only Christians, but also people of any other new faith. Europe must protect any and all religions and cultures. Therefore, the Buddha monuments blown up in 2001 by Taliban in Bamyan, Afghanistan are as valuable to humankind as Palmyra in Syria.

Russia does care about what’s happening with the UNESCO monuments and other world heritage sites. Today, our country is fighting terrorists in Syria not because the Russian leaders nurture some geopolitical ambitions.

The main reason is that we cannot afford having barbaric forces, responsible for the destruction of Christian communities, authentic Islam, and monuments from both the Christian ancient world, take root on our southern borders.

I am convinced that saving and preserving world heritage sites should unite all of Europe and cultural humankind today.

As is known, matter and spirit in culture are not just intertwined; they are in fact part of each other. They are united, and it is impossible to separate them. Here is how material and spiritual cultures in the political, economic, environmental and aesthetic cultures intersect and complement each other.

I’m not going to prove to today’s conference participants the immutability of the spiritual principles that gave rise to humans, the crown jewel of nature, who, in their ascension to the light of knowledge, spirituality and harmony with the world have for thousands of years been overcoming everything that is dark, cruel and destructive.

The chaos of the modern world cannot be described as a picture of universal harmony. One gets the impression that someone out there, some out of ignorance, others because of lack of understanding, still others because of a need for brutality, profit considerations or a maniacal desire to own the world, were infected with a terrible virus, worse than Ebola, a virus causing the desire to destroy everything and end up in the pitch darkness of a primitive cave.

Do we really want such a terrible epilogue in the evolution of human civilization? Are we prepared to uphold those unprecedented values, which gave us great history, great music and great literature? Do we want to forget the work and the masterpieces of the greatest minds and geniuses, such as Socrates, Tacitus, Michelangelo, Pascal, Goethe, Mozart, Beethoven, Pushkin, Tchaikovsky, Balzac, Swift, Tolstoy or Dostoevsky?

I reiterate, the destruction of historical and cultural monuments is not an idle question for Russia. Our country is opposed to how things are going not only in the Middle East, but also in several countries of the former Soviet Union, such as Ukraine, where Nazis, just like ISIS terrorists use sledgehammers to destroy historical monuments. However, Europe, which is so proud of its cultural code, imposes economic sanctions not on the Nazis, but on Russia. Isn’t this evidence of a value impasse in which Europe has found itself today?

Fighting terrorism and Nazism, the barbarism of the 21st century in all its manifestations, is the main imperative which should unite the civilized portion of humankind today.

Today, I want to ask everyone in the audience a question: are you in favor of or against the destruction all over Europe of monuments to Soviet soldiers who saved Europe from fascism?

The outstanding Russian thinker Alexander Zinoviev said that humankind will die of its own stupidity, by throwing out of its mind and life the values, which, in combination, created a reasonable person, and by rejecting the values that once united us. Will his dire predictions come true?

Today more than ever, we are faced with accepting the responsibility for our civilization. We must, in a guaranteed manner, take the only correct decision in response to a philosophical question posed by great William Shakespeare, “To be or not to be?”