The prominent Russian philosopher Alexander Zinoviev was awarded posthumously the title and medal of “Honorary citizen of Kostroma region”. The ceremony took place in August 2008 on the eve of the 64th anniversary of formation of the Kostroma Region. The widow of A.Zinoviev was accompanied by Mr Nikolai Zlobin (director of Russian and Asian programs of the World Security Institute, USA) and Alexander Radovitzky (vice-president of the publishing house AST, which edits the complete works of the late A.Zinoviev). 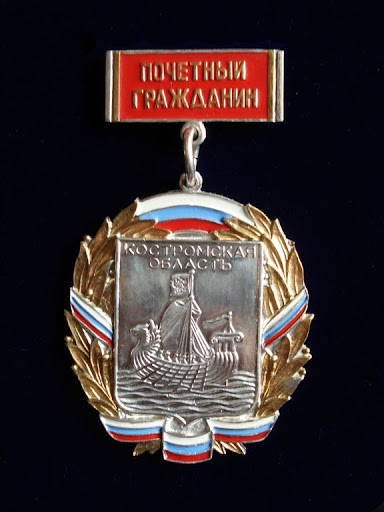 The prominent Russian philosopher Alexander Zinoviev was declared posthumously “The Honorary citizen of City of Kostroma” and decorated with a commemorative medal. The honorary  ceremony took place in August 2008. The widow of Alexander Zinoviev was accompanied in this ceremony by Mr Nikolai Zlobin, director of Russian and Asian programms of the World Security Institute, Washington DC, USA and Alexander Radovitzky, vice-president of AST, publishing house of the complete works of A.Zinoviev.

The Governor of the Kostroma Region Mr Igor Sluniaiev said: “I am proud that the grand citizen of Russia, our prominent countryman, thinker and famous writer Alexander Zinoviev has returned to his Motherland.

Mrs Olga Zinoviev, life-long partner and widow of the late academician, actual director of  Zinoviev Research centre thanked the government of the Kostroma Region for the high posthumous decoration of Alexander Zinoviev: “I am proud and glad for our country where at last manifests the fair attitude to the golden human treasure of the Russian nation. Europe considered it a privilege and a duty to recognize Alexander Zinoviev as its honorary citizen. Today on the very eve of the 30th anniversary of expulsion of the great thinker Alexander Zinoviev from the USSR his Russian homeland does the same.

I consider the decision of Mr Igor Sluniaiev, governor of the Kostroma, who embodies the new healthy generation of Russian politicians as a true example of the civic responsibility. Kostroma is famous not only for being one of the truly Russian regions – but also the spiritual Motherland of patriarchs of the Russian thought and verb: Alexander Zinoviev, Nikolai Nekrasov, Vasili Rosanov, Victor Rosov, Alexandr Ostrovsky, Pavel Florensky. They are the national treasure of Russia, its creative and human capital that makes Russia a great world power.

Note: Alexander Alexandrovich Zinoviev (1922 – 2006 ) – prominent Russian thinker, philosopher, logician and sociologist, honorary citizen of European cities of Ravenna, Avignon, Orange, full member of academies of sciences, laureate of international scientific and literary awards. Alexander Zinoviev is buried in the Novodevitchi National cemetery in Moscow. After the publication in 1978 in the West of the sociological novel « The Yawning Heights » he was expelled from the USSR to Germany. Alexander Zinoviev authored over 60 books, published in over 3 million copies in 26 languages. To this day no official excuses by the Russian State were presented to Alexander Zinoviev or his family after his comeback from forced emigration in 1999.