More than anyone else, he was responsible for handing the US and UK their greatest strategic victory ever

RI  continues with a series of articles about the life and works of the brilliant postwar Russian philosopher, author, and dissident, Alexander Zinoviev.

This time, his famous essay on how the West destroyed the USSR is introduced by his widow Olga, chairwoman of the Zinoviev Club at Rossiya Sevodnya, a major Russian news agency.

Zinoviev often said that judging from Gorbachev’s behavior, one cannot exclude the possibility that he was working for the West, but that at the end of the day, it didn’t really matter, because what he did served the West’s interests exactly.

Previous articles in the series are:  The End of Communism in Russia Meant the End of Democracy in the West  and  Zinoviev to Yeltsin in 1990: “The West Applauds You for Destroying Our Country” , This Great Satirist Gloried in the Absurdities of the USSR (Alexander Zinoviev)

Translated from Russian especially for RI by Sergei Malygin

Before you, dear readers, you have one of the seven chapters of Zinoviev’s famous essay ‘How to Kill an Elephant With a Needle’, written in 2005, a year before the author’s death.

The material for it derived from recollections of the numerous meetings Alexander Zinoviev had with representatives of the West’s political elite who were responsible for the formation of policy with respect to the USSR.

The idea underlying little episodes, including historical examples, is as elementary and limpid as spring water: how to work out the weak spot of the enemy, adversary, scoundrel or opponent, irrespective of their number and armaments, both literally and metaphorically.

With graphic clarity, as if it were a lesson, he provides a whole series of examples, beginning with his own example involving a compass but then using classical examples from history, such as the episode with Francisco Pizarro, the conquistador conqueror of Mexico, who demonstrated extraordinary quick-wittedness in his detection of the adversary’s weak spot (the Indians).

Astonished by the attack of a handful of Pizarro’s warriors on their leader, whom they regarded as a god and who in their conception was invulnerable and untouchable, the Indians capitulated without a fight. “Pizarro”, wrote Alexander Zinoviev, “had divined the enemy army’s weak spot, its Achilles heel”.

In this essay he writes about how the Soviet Union’s weak spot turned out to be the top echelons of the leadership.

Zinoviev was often called a dissident, but he never thought of himself as such. He was a critic of the Soviet system, but he was not its enemy.

In his later years he often repeated that, if he had known what a dreadful fate awaited the USSR, he would not have written a single critical book or article about it.

How to kill an elephant with a needle

I was exiled to the West in 1978, when the thirty-year course of the Cold War hit a radical turning point.

Cold War leaders have studied Soviet society since the beginning. The new science of Sovietology has been developed employing thousands of experts and involving hundreds of research centers. 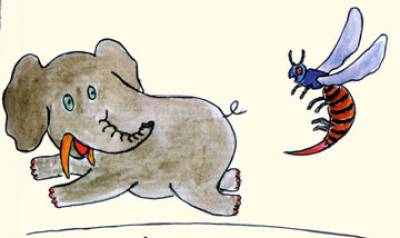 But for a long time (perhaps until the end of the 1970s) the main focus was on the ideological and psychological manipulation of the general population, the creation of pro-Western masses of Soviet citizens who in actuality would play the role of the West’s “fifth column” and (intentionally or unintentionally) working on the ideological and moral disintegration of the Soviet population (not to mention other functions). Thus the dissident movement was created.

In short, the main work was carried out through the destruction of Soviet society “from below”. Important achievements had been made that became factors in the future counterrevolution. But they were not significant enough to bring the Soviet society to its collapse.

By the end of the 1970s, the Western Cold War leaders understood that. They realized that the government system formed the basis of Soviet communism and the party apparatus was at its core. Having thoroughly studied the party apparatus, the nature of relations between its members, their psychology and qualifications, selection methods and its other characteristics, Cold War leaders concluded that Soviet society could be destroyed only from the top, by destroying its system of government.

To destroy the latter it was necessary and sufficient to destroy the party apparatus, starting from its top level – the Central Committee of the Communist Party of the Soviet Union. So they shifted their main efforts in that direction.

They found the most vulnerable place in the Soviet social structure. It was not difficult for me to guess this shift, because I had an opportunity to observe and study that hidden part of the Cold War.

In 1979 at one of my public speeches  (“How to kill an elephant with a needle”), I was asked what in my opinion was the most vulnerable point in the Soviet system. I replied: the one that is considered the most reliable, namely, the apparatus of the Communist Party of the Soviet Union, within it – the Central Committee, and within the latter – the General Secretary.

The reader should not think that I gave that idea to Cold War strategists. They realized that without me. One of the employees of the Intelligence Service told me that soon they (i.e. forces of the West) would put their man on “the soviet throne”.

At that time I did not believe that was possible. I spoke hypothetically of the General Secretary as the West’s “needle”. But Western strategists already considered that to be a realistic proposition. They developed a plan for winning the war: take the supreme power in the Soviet Union under their control by promoting “their” man to the position of the General Secretary of the Central Committee of the Communist Party of the Soviet Union, force him to destroy the CPSU apparatus, implement an overhaul (“perestroika”) that would start a chain reaction and consequent breakdown of the entire Soviet society.

Such a plan was realistic then because the crisis at the top level of Soviet power was already evident, due to the senescence of the Politburo of the Central Committee of the CPSU.

Soon “their” man in the role of the Western “needle” appeared (if he was not “prepared” in advance). Admittedly, the plan worked well.

What distinguishes this Cold War operation is that the method of “killing an elephant with a needle” was applied against a less powerful, yet mighty opponent, to obviate the possibility of a “hot war” becoming dangerous to the point where the advantages of the West could disappear, as happened in the war of Germany versus the Soviet Union in 1941-1945.

The method in question made it possible to avoid risk and losses, save time and win by proxy. The method invented by the weak to fight stronger opponents was adopted by the most powerful forces on the planet in their war for domination over the entire human race.

On the Death of Giulietto Chiesa

“The demise of the Russian communism” (literary film almanac “Zinoviev, I Love You!”)

MESSAGE OF OLGA ZINOVIEVA TO HER CONTEMPORARIES