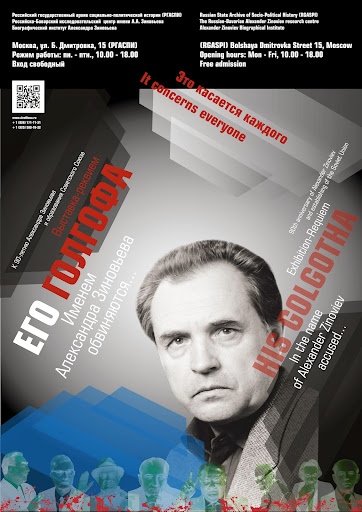 HIS GOLGOTHA. In the name of Alexander Zinoviev accused…

A number of unique documents have been revealed to the public for the first time. They concern the judgement of the Russian Socrates, or the persecution of Alexander Zinoviev: writer, thinker, philosopher, sociologist, logician, poet and artist of international renown, and also the most prominent ideological visionary to voice his thoughts in Russia in the late XX and the early XXI century.

The preparations for the exhibition and all related work was conducted against the background of a very symbolic convergence of historical dates and events: 90 years since Alexander Zinoviev’s birth, 90 years since the formation of the Soviet Union and 90 years since the departure of the first one of the “Philosophers’ Ships.”[1]

The theme of this requiem exhibition, His Golgotha, reflects the title of Alexander Zinoviev’s seminal literary work, Go to Golgotha–a book about how to be an individual and remain spiritually alive as a human being–to stay an individual regardless of everything, including the lack of faith in one’s own ability and the evils of the world outside–to remain an individual regardless of being immersed into the most hideous depths of existential filth. Go to Golgotha delineates the entire spiritual journey of a Russian – the tragedy of a spirited and spiritual human being that made the choice to stay pure of heart and uncorrupted in a gruelling epoch when the Soviet system forced the cream of scientific and artistic intelligentsia to either leave the country, opt for inner emigration and become a hermit, or resist the system alone. Thus, Alexander Zinoviev, born in the year when the first “Philosophers’ Ship” departed Russia, became the most vivid embodiment of “Philosophers’ Ship No. 2.”

The exposition is built around the symbolical 35 volumes collected by the USSR KGB and destroyed in 1990, right before the dissolution of the USSR, which reflect the turbulent and tragic biography of Alexander Zinoviev.

Alexander Zinoviev never considered himself a victim of the regime – his own definition of himself was “a romantic communist,” and he remained faithful to the epoch’s ideals until the very end. He was the most fascinating intellectual product of the Soviet epoch – the great civilisation alternative for the entire humanity. He stayed true to his motherland regardless of the fact that the country had treated him as the archetypal evil stepmother.

Nevertheless, the struggle and strife that accompanied his life are doubtlessly his sacrifice at the altar of free thought. This exhibition illustrates Alexander Zinoviev’s journey to his own Golgotha, exposing the numerous betrayals by friends, colleagues and students, analysing the phenomenon of informers and writers of reports to the KGB in the historical context of the “great historical betrayal” that would follow shortly – something associated by Zinoviev with the collapse of the great Communist project known as the USSR.

The documents and memoirs put up for exposition illustrate the very dawn of the epoch of the great historical betrayal, when the liberal intellectuals and thinkers of the 1960’s laid down the foundations of what would evolve into the Perestroika and, eventually, the death of Russian communism and the disintegration of the Soviet Union (dubbed the greatest social catastrophe of the XX century by Alexander Zinoviev).

What we analyse here is not merely the phenomenon of betrayal, but also the destructive part played in the destiny of the Russian genius Alexander Zinoviev by human envy. It was envy verging on hatred that became the human weapon directed at one of the most significant representatives of the Soviet humanitarian scientific thought during the second half of the XX century.

Alexander Zinoviev’s life was a journey travelled by an individual, a human being and a warrior who used to say “I am a sovereign state of one.” It was the way of a prophet never recognised as such by one’s own country. Soviet rulers, afraid so much of Zinoviev and his daring analysis of the Soviet society that they had decided to silence him, dealt the most destructive blow to the interests of Russia. People who became thrown out of the country were the only ones who had any notion of what was really going on–those who understood what “they” were up to. And Alexander Zinoviev was getting in “their” way.

His Golgotha is a requiem exhibition; like any requiem, it is an expression of grief and a memorial service, and its purpose is the purification of one’s soul. It serves as an opportunity to ponder the life of the Russian genius in greater depth, as well as the civilisational lessons that the great Russian project taught human civilization in the historical context, and how their destinies remained entwined throughout.

A requiem exhibition is a sacred space. This is where one hears the voice of conscience – where truth reigns triumphant – where the act of accusation urges one to repent and become cleansed. This is the chapter in the history of Russia that needs to be closed for any forward movement to be possible.

This is why His Golgotha is an exhibition that concerns and warns everyone – it is the bell that tolls for us all. It makes one reflect and see the truth behind the sturdy walls of dusty archives, helping one with the task of staying an individual and calling unto each and every one of us: “People, don’t let yourselves be deceived!”

•     Archive of the President of the Russian Federation

•     The State Archives of the Russian Federation (GA RF)

•     Archive of the Russian Academy of Sciences

•     State Archives of the Kostroma region

•     Archive of the International Society “Memorial”

Official partners: Administration of Kostroma Oblast, The Commission for Coordination and Cooperation with Compatriots Living Abroad

[1]Philosophers’ ships is the collective name of several boats that carried Soviet expellees abroad. The main load was handled by two German boats, the Oberbürgermeister Haken and the Preussen, which transported more than 160 expelled Russian intellectuals in September and November 1922 from Petrograd to Stettin, Germany. Three detention lists included 228 people, 32 of them students (source: Wikipedia).