I met Alexander and Olga Zinoviev in 1986. At that time he was following the Italian publication of his book Katastroika, an acronym formed by the word catastrophe and perestroika.

The same year President Ronald Reagan signed the anti-nuclear treaty IRF (Intermediate – Range Forces Treaty) with Michael Gorbatchev on the 8 December 1986. The whole of the West breathed a sigh of relief, we could hope for the end of the Cold War and no longer fear a nuclear catastrophe which the Cold War created and terrified the Western countries of for forty years. 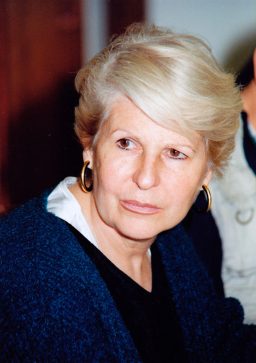 I was amazed to see Zinoviev skeptical, critical about this extraordinary event, but this important intellectual was seeing beyond what the media stream were telling us, and he proved to be right.

Another time I met Alexander Zinoviev in Belgrade, just before the small Yugoslavia (Serbia & Montenegro) was bombed for humanitarian reasons: to save a historically Serbian region from the Serbs.

Alexander, one of the few European intellectuals but Peter Handke, was supporting with his presence the right to survival of a population condemned by disinformation and by media, just because they believed in socialism and in the sovereign right of a nation for a free choice. Yugoslavia was also blamed for an affinity of spirit that linked the country to Russia, at that time inattentive towards Serbian problems. Alexander was with them, as later he sided with Slobodan Milošević, when, after he was appointed Head of State to sign the Dayton Treaty for the Serbs of Bosnia Herzegovina, was raised to public enemy, genocidal criminal and imprisoned in The Hague to be judged during a  more political than legal process. Alexander knew he could pay for his loyalty to his principles, but nothing prevented him from doing what he thought right, because he was a man for all seasons.

Today, I understand the skepticism of Alexander Zinoviev: the same protocol that dissolved Yugoslavia and criminalized its leaders, was   repeated in Iraq, Libya, Ukraine and Syria; the dream of Europe is sinking into a democratic and economic entropy in less than twenty years; the ghost of fascism is back, the famous IRF treaty is decommissioned and we are again facing a new cold war. The climate indicates that  earth is coming to a point of no return. A river of people leaves  Latin America in search of survival in the USA, just as the mass of refugees from Turkey, whose biblical exodus put Europe in front of its diversity and provoked nationalist positions in many partner States finalized by Brexit. Was there a precise plan to move this tide of unfortunate people? Dangerous military war games are taking place anywhere, soon Trident Juncture 2018 in Northern Europe; in Sweden information pamphlets to families on how to behave in case of a war attack are already distributed. All this happens in the total silence of media.  Can anyone stop this announced catastrophe?

Alexander Zinoviev’s writings were alerting us not to believe in fake promises, in fake treaties, he is no longer with us, but we have his books and his thoughts.